Home Uncategorized The Rolling Stones – One of the most Iconic Rock Bands in...

If there’s any rock band that’s held their own when it comes to popularity worldwide and consistent in all they do, then the award goes to the Rolling Stones. More than half a decade after the group was formed, they still can sell out tickets and fill massive stadiums.

The Rolling Stones represent a formidable and durable band that has outlasted most other rock band partnerships. Some people even refer to the Stones as the greatest rock- and- roll band to have ever existed. They single-handedly laid the foundation for other rock bands to entertain generations to come.

The British group sprouted in 1962. They relied a lot on Chicago blues to create their version of the dark rock and roll they’ve come to be associated with. Original members of the band included: Mick Jagger, Keith Richards, Brian Jones, Bill Wyman, Charlie Watts. Other members who came on board, later on, include Mick Taylor, Ron Wood, and Darryl Jones

Formation of The Group 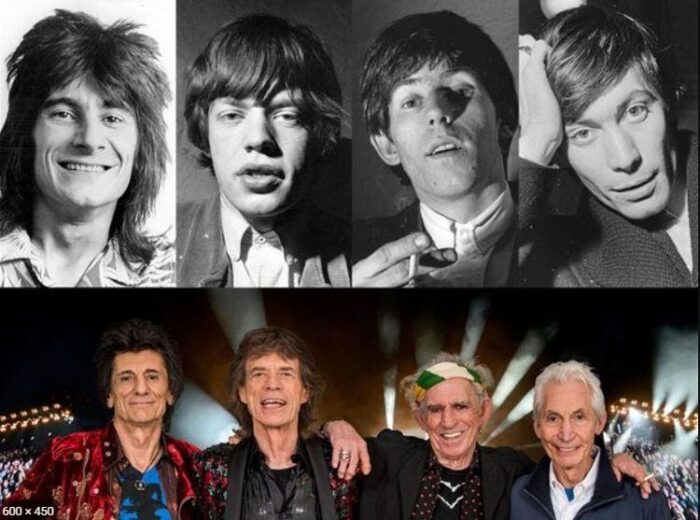 From 1962 until 1965 The Stones had many gigs throughout the UK and USA clubs with several songs reaching top charts. “I wanna be your man” was written by John Lennon who gave it to The Rolling Stones and it was also later included in the Beatles album.

The true success came in 1965 when “Satisfaction” reached Number 1 across the charts. Keith Richards wrote the famous guitar riff in collaboration with Jagger. Later they said that it gave them the confidence to write their own songs and music. The next album “Aftermath” was written entirely by Keith Richards and Mick Jagger which launched their careers and landing in No1 in UK and No2 in the US. Many songs became hits like “Lady Jane” and “Paint it, Black”.

The Stones tried to set themselves apart from the clean-cut boys’ image like the Beatles by refusing to wear suits and ties, and instead went for more rebellious looks sporting long hair and going for that raunchy look. In 1966 they hit the road with their US tour where they were met with wild crowds worshiping their anti-police attitude. The local law enforcement had a lot of trouble keeping the concert-goers in check.

This was the beginning of the Rolling Stones’ problems with the police. In 1967 they were targeted by the police for their drug use after a newspaper published an article claiming that rock stars and drugs go hand in hand, naming particularly the members of the Rolling Stones. The same year, Jagger was sentenced for 3 months in prison for smoking pot and Richards got 1 year in prison for letting marijuana be smoked on his property. The band was plagued with drug use, and in 1969 Jones quit the band claiming that he is not fit to tour and was unable to obtain a US visa due to him abusing drugs. Later that year he died drowning in a pool at his home in Sussex. Mick Taylor replaced him.

In the next couple of decades, the band toured, released 11 more albums, and saw some moderate success. The Rolling Stones were still heavily involved in drugs, with Taylor quitting the band and Richards admitting that he is unable to perform due to constantly being high. Jagger and Richards had a fallout which was tearing the band apart. To make matters worse, they refused to pay taxes and chose the Caribbean islands as their tax evasion paradise. Because of this, the members were not able to maintain UK citizenship which made touring almost impossible.

In the late 80s and early 90s, the band set their differences aside and made a comeback to the world music scene with the “Voodoo Lounge” album receiving Grammy Award for the best rock album in 1995. The tour lasted for almost two years after that and it was recorded as the most successful production to that date.
In 2012 the famous band was still performing while celebrating its 50th anniversary.

The Stones Best Songs of All Time

Click here to find out more information about the Stones

Crazy Facts About The Stones

During their almost 60-year old band, they have had multiple feuds and splits, only to come back together as a unity and release more music. During all this time they had 48 tours worldwide, recorded 30 albums and 120 singles, and sold over 200 million copies. They were inducted in the Rock and Roll Hall of Fame in 1989, together with all of their past members, alive and the ones that passed.

Live performances are something everyone will remember them by since their tours were always largely successful and the crowds couldn’t get enough. They were called “the masters of live performances” many times by journalists and fans. During the tours, they performed in front of the full stadiums over 2000 times around the world. They were the first ones to use props from the theatres, and incorporated circus acts into their stage appearance. Even today, Jagger (75) is still going strong even though the band stopped performing. The aging rock stars are more focused on writing music and enjoying their fulfilled dreams.