The t-shirt is noted as one of the most basic pieces of clothing known to mankind. It is versatile enough to suit the unique tastes of people from all walks of life. You can find them in a variety of styles, sizes, colors, and prints. But how did t-shirts burst out into the scene? Have you ever thought about the item before it was invented?

History of the T-Shirt

The history of the t-shirt as a piece of fashion has seen great evolution throughout the years. It has gone through numerous changes before it became known as the fashion staple that it is now.

The t-shirt has become so ingrained into today’s society that it is hard to imagine that its history is actually not that very old. The first ever t-shirt that was manufactured was in 1898 during the time of the Mexican-American War. However, it was not until the year 1913 when it was issued as a standard part of the US Navy’s uniform as an undershirt.

But the official name “t-shirt” was officially used in 1920; it was also around this time when it was added to the English dictionary. During this time, t-shirts were rarely used as a piece of clothing on their own. Instead, they were used mostly as undergarments (or worn beneath another shirt).

Before it was known as a t-shirt, the apparel was called a union suit. It garnered a lot of attention when textile company PH Hanes Knitting released their first t-shirt design in 1902. Nearly three decades later, Sears released their own version of it in 1938. They called it a gob shirt at that time. It looked like modern t-shirts and was already used as an outer garment.

The popularity of the t-shirt surged in the 1950s to the 1960s. Its popularity was made possible by the influence of Hollywood stars (of which you will learn more of later). Needless to say, they became trendier and paved the way for more designs to be created.

From the 1970s to the 1980s, the t-shirt clearly infiltrated the popular culture scene. In fact, there was a growing demand for them such that new t-shirt printing technologies were developed to cope with that demand. The emergence of mall shopping centers also partly contributed to its growing popularity as they became more accessible.

In the present day, it is hard to imagine the fashion industry without a t-shirt. However, it is no longer simply a piece of fashion. T-shirts are now used as a branding tool. It is not just businesses that use t-shirts to promote their brand but organizations such as schools, churches, athletic teams, or other brands such as TV shows, movies, games, and music bands.

As the history of the t-shirt evolved, so did the trends that influenced its design and look over those years, as well. The seemingly endless possibilities provided by the t-shirt as a platform for daring designs has produced classic results.

The graphic tee trend is one of the most iconic trends of all-time. One of the reasons why it is a classic is that it adapts to the times. The advancements in t-shirt printing technologies also mean that you can incorporate basically any design imaginable. From famous symbols to music band logos, there have been many iconic graphic tee designs over the years. A few good examples of these are the Rolling Stones “Lick” tees, Che Guevarra shirts, Hard Rock Café tees, Nirvana and The Beatles tees.

Another daring trend that emerged since t-shirts became a fashion staple is the army shirt. This is not altogether surprising given the fact that the use of t-shirts started out in the military during the Mexican-American War era.

Since then, counterculture trends also emerged and were among the popular trends on t-shirts. Some of the subjects that were featured on graphic shirt designs included drugs, politics, sex, etc. Any subject that showcased liberal attitudes had a large influence on t-shirt designs over the years, but it saw its peak during the 1960s to 70s era.

How T-Shirt Became a Fashion Staple

It is difficult to pinpoint exactly how t-shirts became so popular and a fashion staple. However, according to Teelooker T-shirts, the t-shirt’s initial popularity was due to the influence of Hollywood stars who wore them on screen. Over the years, it has greatly evolved and has showcased its versatility.

The versatility of the t-shirt as a piece of garment can be attributed to it becoming a fashion staple. It showed limitless potential for how t-shirts can be worn and used. It initially opened up opportunities to become a piece of fashion item that showcased creative expression. Graphic tees enabled the wearer to express themselves through the designs printed onto the shirt. From their favorite movies, bands, TV shows, and other designs of their choice, it was a great way to showcase your personality on first sight.

But t-shirts evolved from being a tool of creative expression to a marketing tool. It was adapted by businesses to promote their brands. It was also utilized for spreading the word about a social or political cause.

Needless to say, the t-shirt became whatever you want it to be. It is this versatility and adaptability that has made it into a fashion staple.

Cult Figures Who Made the T-Shirt Cool 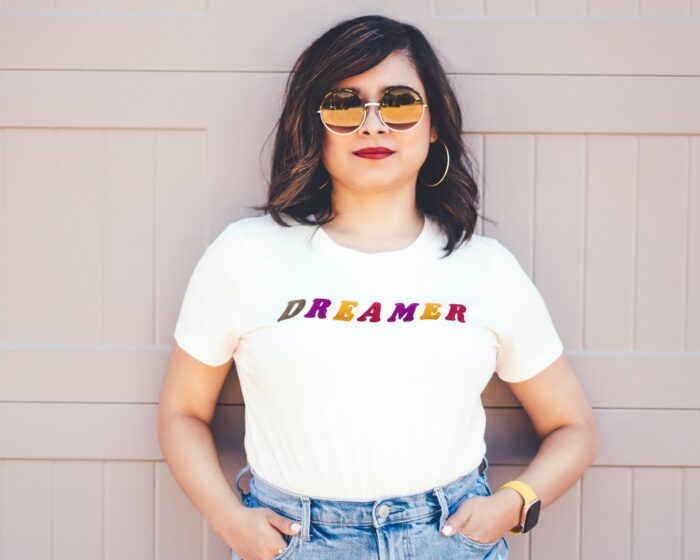 Before the t-shirt became cool, it was just like any piece of garment. Its rise to popularity is linked to the famous names who were initially spotted wearing them. Their influence and celebrity status among their fans and the movie industry has contributed to the rise of t-shirt’s popularity in the decades that followed.

James Dean is a good example of the original cool kids who popularized the t-shirt during the 1950s. James Dean’s go-to fashion was a slick white t-shirt, red jacket, and blue jeans. This look was made popular by the Hollywood actor when he wore it in the 1955 film “Rebel Without a Cause”. There is probably no other look as iconic as this in relation to the history of t-shirts. Hence, it laid the foundation for how cool this look would be, as well as how classic the t-shirt will be. There is no other look that is as synonymous to effortlessly cool.

It wasn’t just James Dean, though, who is famously linked to making the t-shirt cool. Marlon Brando is another popular name associated with it. His character in “A Streetcar Named Desire” also featured a signature look that included a plain white t-shirt. Marlon Brando was highly famed for his cinematic performance and was revered as one of the best actors of his generation.

Apart from that, he was also looked up to as a style icon. Hence, it was not a surprise how he helped make waves for the t-shirt when he sported it in the aforementioned movie. In fact, many men desired for this piece of garment because he exemplified a hyper-masculine physique and the idealistic male aesthetic while wearing the t-shirt in the movie.