Home British Prince Harry’s Ex Opens up About Their Breakup

The ex-girlfriend of Prince Harry Cressida Bonas has admitted that she feared she would forever be labeled as an “it” girl in public because of her relationship with the famous prince.

Harry and Cressida were a couple from 2012 to 2014, and they met through Harry’s cousin, Princess Eugenie. The 31-year-old Cressida has been building an acting career for years, and she pointed out that she was incredibly insecure because of the attention she received in the media as Harry’s girlfriend, People wrote.

Harry’s ex-girlfriend is engaged to Harry Wentworth-Stanley, and she pointed out that she and the prince are in a great relationship.

She was even at his wedding to Meghan Markle two years ago, along with another of his exes, Chelsy Davy. 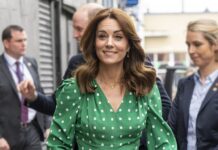