Home Sport Who Are the Worst NBA Draft Picks of All Time?

2020 has seen the first-ever virtual draft for the NBA. This was always a keenly awaited event, as teams attempt to give themselves the best possible chance of success by picking up the hottest new talent.

Anthony Edwards was the first pick in the draft by the Minnesota Timberwolves. Born in Atlanta, Edwards is 6 ft 5 in. He played in the Georgia Bulldogs basketball program, after signing a contract in February 2019.

On his debut, he recorded 24 points, nine rebounds, and four steals in a 91–72 win over Western Carolina. This was the highest number of points of a freshman since NBA Hall of

He became the program’s best recruit in the modern era, averaging 19.1 points, 5.2 rebounds, and 2.8 assists per game.

There are a lot of expectations over Edwards’s head to perform and he definitely doesn’t want to end up in the list of the worst draft picks of all time.
About that, who is the all-time worst draft picks who never came near to living up to the hype around them? We piled a couple of them, and you decide which one disappointed the most.

Bowie seemed destined to be one of the brightest stars in the NBA. He had an incredible college career with an average of more than 28 points and 18 rebounds in each game. Bowie picked up a string of honors such as being named national player of the year in 1979 and featuring as an All-American.

A successful spell at the University of Kentucky led to his number 31 jersey being retired, while he was a sensation for the 1980 US Olympic team that ended up beating NBA all-star teams by 5 to 1 instead of going to the Moscow Olympics. However, the injuries that would wreck his career had already started to make their presence felt.

It seems incredible now, but in the 1984 draft, Sam Bowie was the second pick, ahead of Michael Jordan. He went to the Portland Trail Blazers with Jordan joining the Chicago Bulls in the very next pick.

His first season in the NBA was decent but a frustrating series of leg injuries meant that he was unable to fulfill his potential. Bowie finally retired from pro basketball in 1995 with an average of 10.9 points, saying that he wanted to move over to harness racing.

While bad luck with injuries destroyed Sam Bowie’s career, it was a combination of health issues and reportedly a poor attitude and lack of work ethic that turned Eddy Curry into one of the worst NBA draft picks. He was the fourth pick in the 2001 draft, joining the Chicago Bulls after a brilliant career that only took off after he reluctantly switched from gymnastics to basketball.

Things looked good in his second season, as he led the league in field goal percentage and also led the team’s scoring rate. However, an irregular heartbeat issue caused him to miss a series of games. After that, he refused to get a DNA test carried out to find out more about his possible heart condition and it was downhill from there.

This led to him being traded to the New York Knicks but Curry had a poor time there, with accusations of a poor work ethic in regards to defending and jumping for rebounds.
He went on to have an unremarkable career in the NBA, with claims that he would arrive at training camps out of shape and with a poor attitude. He then ran into financial problems after blowing most of the $70 million he had earned. 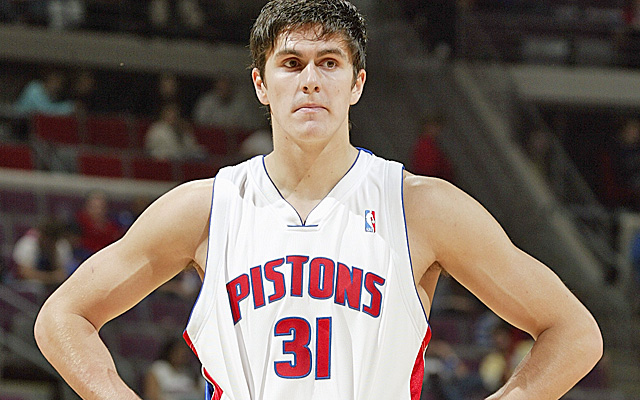 Just imagine for a moment the choice faced by the Detroit Pistons in the 2003 draft. LeBron James had just gone as the first pick but they could now choose from the likes of Carmelo Anthony, Chris Bosh, and Dwyane Wade. Instead, they opted for Miličić as the second overall pick that year. His playing time was limited from the start, although he soon became the youngest player to win an NBA Championship.

It isn’t clear why he never got more playing time with the Pistons, but he only managed an average of 1.6 points per game over 96 games for them. Anyone who has ever bet on NBA games knows that the other top picks from 2003 have had far better careers.

He then drifted from one NBA team to another, rarely playing many minutes for any of them, before playing for a brief period in Serbia.

Miličić ended his pro career in the US with an average of just 6 points and 2.9 rebounds per game. Last we heard, he had tried his luck as an MMA fighter and had then turned to farm in Serbia.

Final Thoughts and Other Takes From The 2023 Draft

Here you have some of the worst drafts picks in NBA history. Sometimes players who are highly rated college stars flop once they get into the big league and some others who are left undrafted sneak in to have extraordinary careers and defy the odds.

You can check here in BetAmerica a list of the best-undrafted players of all time.
All in all, we predict a great NBA season coming up. We are sure that the Timberwolves fans can’t wait to see Edwards linking up with D’Angelo Russell and we wish all the best to the new prodigy in Minnesota.

Besides Edwards, some other interesting draft picks to look out for in the upcoming season are LaMelo Ball, 3rd pick by the Charlotte Hornets, Isaac Ikoro, 5th pick by Cleveland Cavaliers, and the 11th pick, Devin Vassell by San Antonio Spurs.

Meanwhile, our picks for players who might be too green for the jump into the NBA are 2nd pick James Wiseman (Golden State Warriors), and 4th pick Patrick Williams (Chicago Bulls).
The first was tipped to be the number one pick but suffered a shoulder injury and an NCAA suspension due to the violation of the rules. Wiseman might need time to adapt and the problem with his shoulder might affect the future performance in the GSW.
Meanwhile, Williams will have to battle against the inconsistency, as according to experts he might still be too raw for the pressure of such a big team as the Bulls.
So, what did you take from this year’s draft? Who will we add to this list in the near future?

Nina Smith - January 31, 2023 0
The oldest movies were on a flat two-dimensional screen and had little scope for the viewer to interact with the characters. Today 3D and...