Home TV Personalities Kylie Jenner Before And After Kylie Jenner looks stunning, but she had to undergo several plastic surgeries to have such an appearance. She is a celebrity which means that they criticize her all the time for enhancing her beauty, but it seems that she has learned to ignore all that.

In an interview with ES Magazine, she said she was not against cosmetic surgeries. On the one hand, she denied a breast augmentation or nose job, and on the other hand, she is completely ok with this kind of enhancements if they make one feel more confident.

She said that she has had several lip injections, but what else could be done to her body? People believe that the butt and boobs of the reality TV star are not natural. They suggest butt and breast implants.

What we are going to do is to look through Kylie`s before and after photos so we can understand if she has had any cosmetic surgeries. 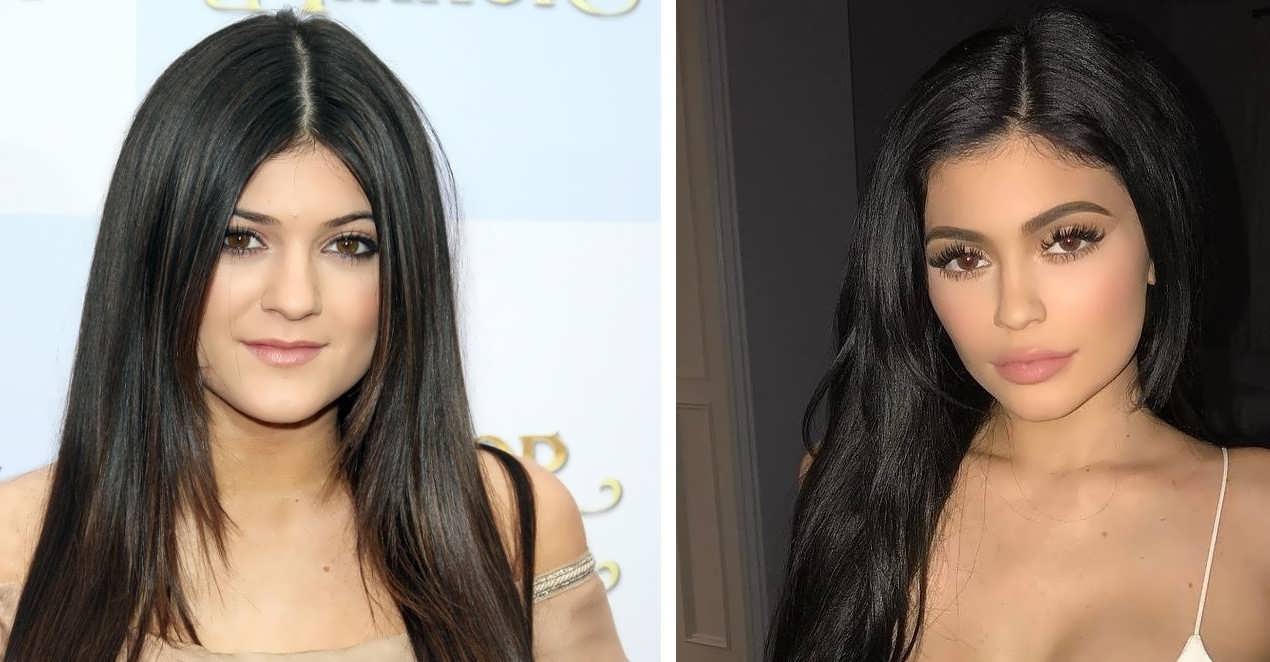 In an interview with Complex Magazine the reality TV star claimed that she loved her nose the way it was. This means that she did not have a rhinoplasty, but rumors did not stop.

Her nose, though, had a different size and shape before. It used to be wider with a bigger tip. If you look at another photo, you will see a slimmer nose bridge.

It has to be noted that the result could be due to proper contouring and professional makeup. it can do amazing things.

Does Kylie Jenner Have Butt Implants? The reality TV star and her sisters are known for the size of their butt but hers is not the biggest one in the family. Kylie`s butt always looks sexy in the photos, so it is always talked about a lot. They would inspect her photos to find out any signs of butt implants. She denies any surgery of this kind and claims that Spanx is the reason why her bottom looks like that.

Do you think it is true?

Did Kylie Have Breast Augmentation?

Breast augmentation is another topic usually discussed by all the critics. The star denies this procedure too. Kylie claims that her breasts look bugger only because of a Victoria Secret Bombshell bra. She is so fond of this bra that she gave the same bra not only to her sisters but to her friends too.

A surgeon from London, though, said she had had a boob job after looking at her photos. You see, Kylie`s cleavage is contoured too well.

Did She Have An Eye Surgery?

The star is fond of applying her makeup in different ways so much that she is even the owner of a cosmetic line. But when looking at her before and after photos, the question is if she has undergone ab eyelid surgery. Her eyes were different before.

It seems that she did have this kind of surgery to enhance her beauty, but this also could be due to longer eyelashes.

What Did Kylie Do To Her Face? 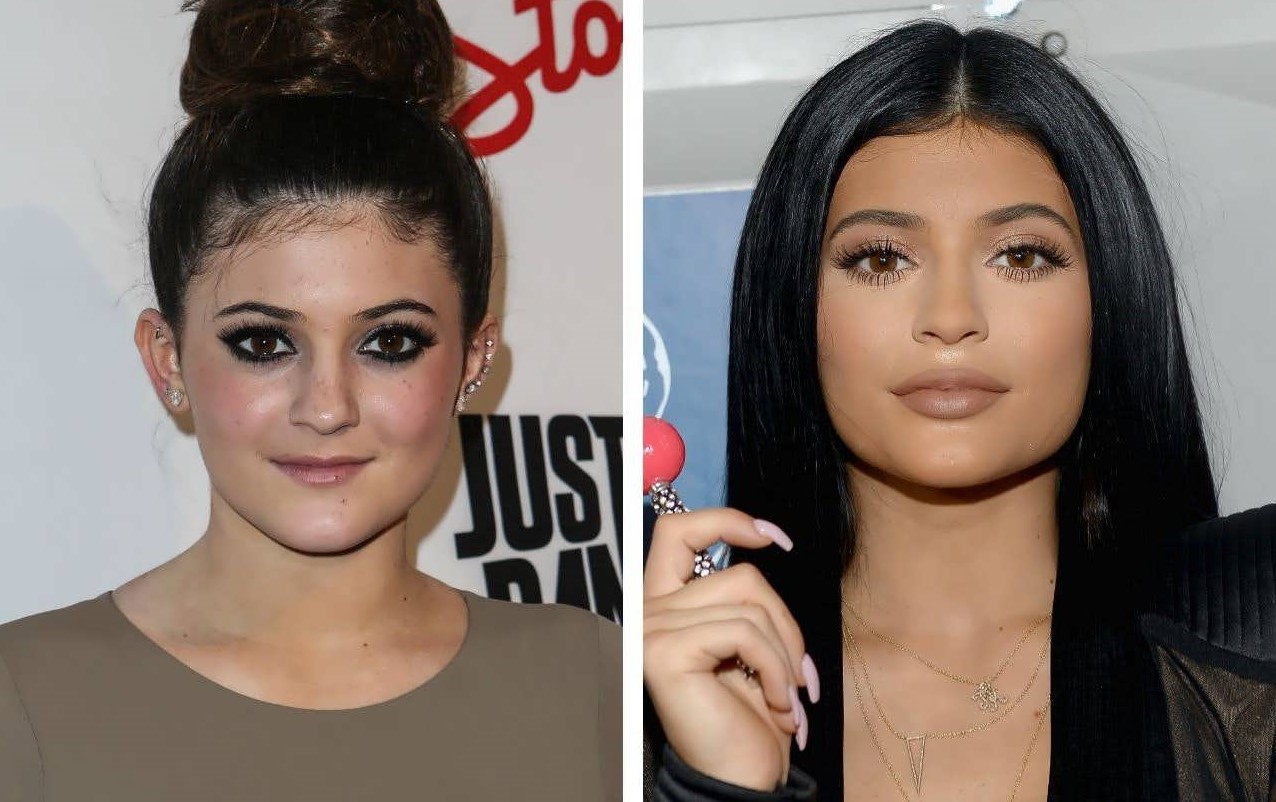 The majority of surgeons are sure that she has had several cosmetic procedures done because her face has changed a lot. The shape of her face is round now, but it used to be square. Botox and fillers could be used here to correct it.

Of course, she heard about that and her answer was that people judge basing on the photos from her childhood. Now she is an adult and she has mastered makeup. she claims that makeup contouring does wonders so there is no need for any cosmetic enhancements.

Has Kylie Jenner Had Lip Injections? 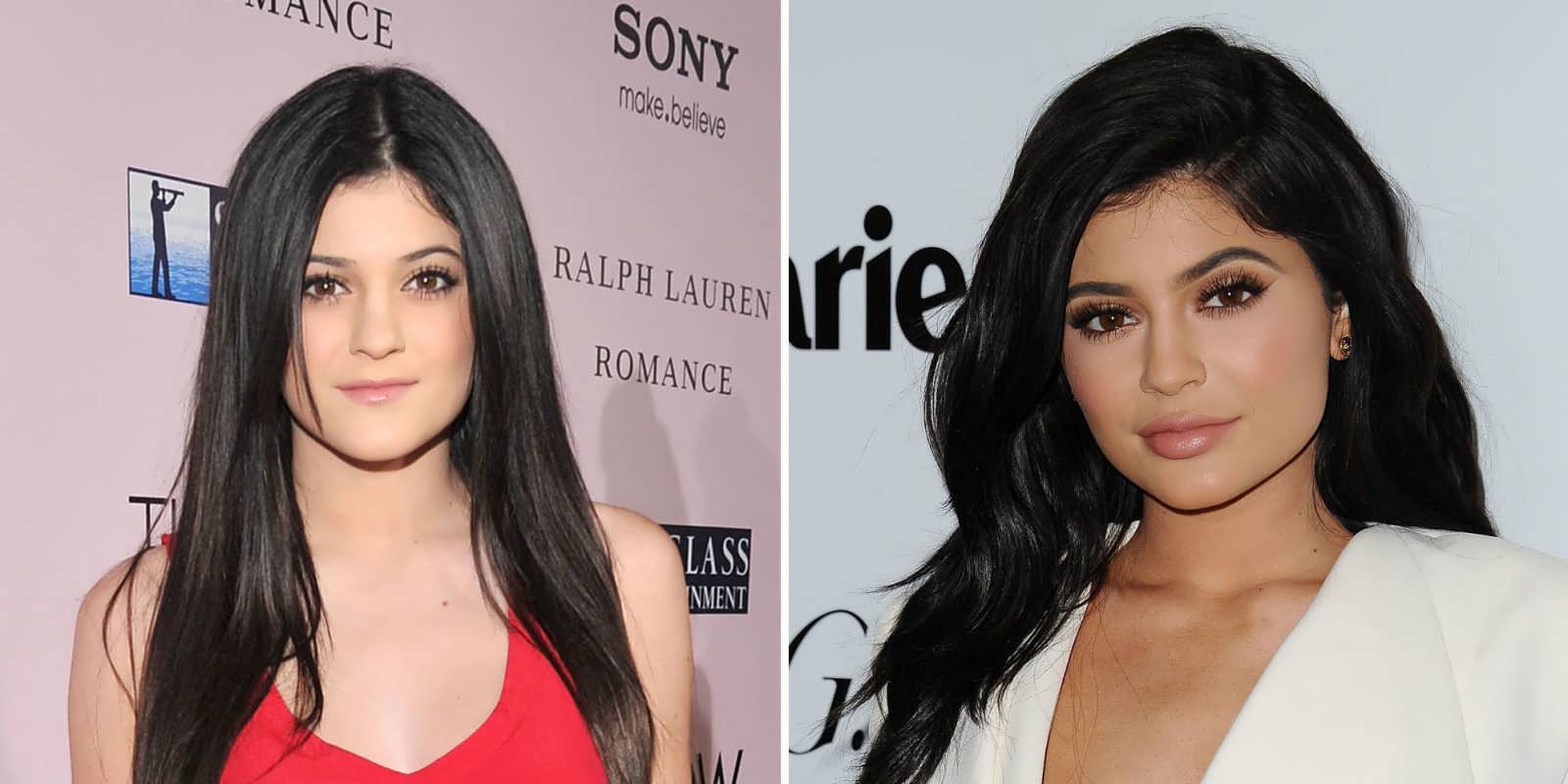 The only procedure the star admitted was lip injections. Before the procedure her lips were thin and that did not make her face look good. Yes, she did it to make her appearance more attractive and balance her wide jaws. Now the critics are sure that the lips are too big.

What is your opinion?

What About Cosmetic Denistry On Her Teeth?

They strongly believe that lip injections are not the only thing done. If you look at her before and after pics, you will see that she used to have crooked teeth that were not so white in addition. Now Kylie`s smile is white and perfect.

There was a promotion of a tooth whitening kit she applied, but experts are sure that that was not the only one procedure. Veneers are so popular now, and there is no wonder if she has them too. Braces could also be the reason, but it is impossible to say for sure as there are no photos of before and after braces.

Now we are going to see how this beauty has transformed over the years.

In this photo both Kendall and Kylie look pretty in these ballerina dresses. Being a little girl, Kylie already had big eyes, which are still one of the most attractive features of her face.

“Keeping Up With the Kardashians” appeared on the TV that year. Just look how her face looked before surgery.

This year the star changed her hairstyle. She is trying to find her own style just like many middle schoolers do.

You can still see baby fat on her legs and arms. She is a teenager and she is a bit plump.

Kylie is a TV star now and she looks really natural here. Her lips are still thin, and her teeth are far from being perfect. Her face is not as round as it is right now. And, yes, her ears used to be bigger.

Makeup was the beginning of all the transformations. She started wearing red lipstick and her heavy jawline is till noticeable. We believe she has to put on lots of makeup to contour it.

In this photo, you can see that her cleavage looks different. It looks bigger. Is that because of the famous bra or because of breast implants?

The photo is from the American Music Awards in LA. Kylie was just gorgeous, and again her new face became the subject of discussions. Everybody noticed how full her lips became and how different her eyes looked. Critics suspected a blepharoplasty.

She also started wearing fake eyelashes. Kylie could be the one who inspired women around the world to wear them.

It was the MTV Video Music Awards red carpet, where Kylie appeared with beautiful skin colour. Her skin and face looked so healthy and smooth that people supposed that has had botox. Her cheeks looked puffy so this could be either face fillers or cheek implants.

A nose job is also possible because the star`s nose looked thinner and sharper. This beauty transformation surprised and impressed everyone.

In this photo, Kylie looks extremely hot in the dress that just showed how sexy and hot she was. Her boobs look natural, but critics will never stop looking for signs of cosmetic surgeries. This time they were sure she has undergone liposuction because her belly was flat.

It was reported that Kylie was pregnant, and they started wondering again if her breasts size became bigger in a natural way due to pregnancy, and if she got butt implants during this period. Maybe all this is really because of hormones?

After she gave birth to a baby, she appeared at the Met Gala. Her body shape looked really good. Too good, so critics believe that she could not get such a body keeping a diet and working out. They again thought that her flat belly was due to cosmetic surgery, tummy tuck in particular.

After inspecting all those before and after surgery photos we can decide on some things. Lip fillers did take place. This fact was confirmed by Kylie herself, so this is something we can be 100% sure. Botox and eye surgery are also suspected, although, she never admitted them.

The star always denies breast and butt implants, but critics will still keep on discussing that. They will always be trying to understand if her body is real or fake.

Kylie belongs to a really famous family, so she will always be under the gaze of social media. She will have to deal with rumors for the rest of her life.

As claimed by one plastic surgeon, Kylie is smart enough to emphasize her natural beauty. The changes in her body and face are not too much. They are just enhancing what she already has. Well done, Kylie!